Homer Winter King Derby: Everything You Need to Know 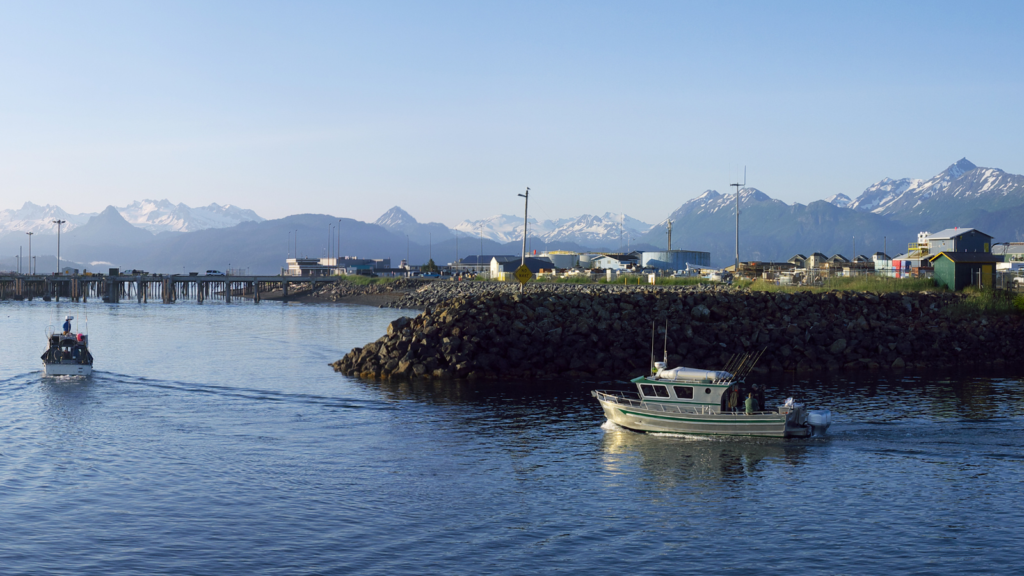 Homer may best be known as a summertime vacation destination, but you’ll find plenty of things to do year-round. When inclement weather does hit, think everything from exploring the art galleries or taking a hot yoga class to sampling mead at Sweetgale Meadworks & Ciderhouse, wine tasting at Bear Creek Winery, or trying an experimental brew at Grace Ridge Brewing.

The short Alaskan spring is a great time to visit before the crowds of the peak season arrive. April generally marks the transition from winter to summer. The rivers that were frozen over in the winter are starting to break up now, and just before sunrise and after sunset, the mountain summits are magical, with an alpenglow bringing surreal shades of red, orange, and pink.

But the highlight of this time of year is the Homer Winter King Derby, making this town truly the place to be.

What is the Homer Winter King Derby?

The state’s preeminent fishing tournament, the Homer Winter King Derby draws anglers from across the globe in hopes of catching a hefty king salmon and the possibility of big rewards with tens of thousands of dollars at stake. It’s the longest-running winter king salmon tournament, with 2022 marking the derby’s 28th year.

Other than halibut, the winter kings are the most sought-after fish during the chillier months, having fed voraciously practically nonstop on whatever prey they can catch, from squid and herring to candlefish.

By late winter/early spring, they range on average between 10 and 20 pounds. The kings can put up quite the fight, and because of their fatty meat and rich oils, it’s the perfect opportunity to put yourself to the challenge: catching a big, tasty fish and potentially a big financial reward. Even if you don’t participate, it’s fun just watching what others bring in.

In 2021, a 10-year-old boy became the youngest champion in the history of the tournament, with his catch weighing over 25.6 pounds. He took home a whopping $87,027. On top of the cash prize for the largest kings that are caught, anglers can compete in side tournaments as well.

Where and When Does It Take Place?

The Derby is hosted in Homer on the Kenai Peninsula which means not only can you enjoy the thrill of the catch, but you’ll be surrounded by soaring snow-capped mountains and old-growth Sitka spruce forests, deep fjords, and driftwood-strewn beaches. The town itself is known for its artsy vibe with plenty of galleries to explore. In addition, it has a rich history to delve into as a place where early homesteaders managed to not only survive but thrive, along with a bounty of delicious local foods from the land and sea that can be enjoyed in a wide range of eateries.

The tournament takes place around the end of winter, heading into early spring in order to take advantage of those fat salmon that have been feeding their insatiable appetites all season. Anglers take to the waters of Kachemak Bay just off the famous Homer Spit, a thin stretch of land that spans for about 4.5 miles surrounded on three sides by the bay.

The Tournament Headquarters is at the Deep Water Dock Area on Freight Dock Road, while the boundary line for fishing runs west to east across the saltwater of the Cook Inlet at latitude 59 46.113. On the Homer side, it runs 23 miles north to Anchor Point.

On the Homer Spit, there will be all sorts of festivities, including food, beer, vendors, music, and of course, lots of huge fish. Just look for the weigh-in stations at Coal Point Trading Company – you can’t miss it.

One of the first questions you’ll probably have after making the decision to go is what to pack. April temperatures are typically in the 40s, and on any given day, there’s a 31 percent chance of rain, much drier than September with a 46 percent chance of wet weather. Still, you’ll want to be prepared for it all by bringing clothing that can be layered and topped with a good waterproof jacket. Think synthetic materials as, unlike cotton, they don’t hold water and will dry quickly. Rubber-soled footwear, gloves, a hat, and a pair of polarized sunglasses to protect your vision and reduce glare are also a must.

All anglers must have an Alaska Department of Fish and Game fishing license and a valid King Salmon Stamp. Only one rod per angler is allowed, and safety equipment must be in compliance with Coast Guard regulations.

While this is a one-day event, with fishing lines in no earlier than 9 a.m. and out by 4 p.m., you’ll want to plan for extra time to explore Homer and just relax and enjoy the spectacular scenery simply. At a minimum, plan to be there the day before and the day after the tournament. But with a week or more, you’ll be able to take advantage of all the area has to offer.

There is a wide range of hotels, resorts, and other accommodations in Homer, many of which offer beautiful settings. But there is only one located right on the Homer Spit and it happens to be the best place to stay: Land’s End Resort. Here you’ll be steps away from it all, providing easy access to the competition. Nearly all rooms have private balconies that face the bay, providing enchanting water, mountain, and wildlife views. You can even choose to stay in a luxurious, fully-furnished beachfront home with two- to four-bedroom options.

Whether you plan to fish or simply watch the excitement, Land’s End is the place to be. The Chart Room is its on-site restaurant and arguably the very best place to catch the action while dining on mouthwatering fresh-caught fish. Plus, the resort offers a special Getaway Package that allows you to take advantage of some great, discounted off-season rates. It includes dinner at the Chart Room along with a number of other perks like access to the Fitness Center, which has an oceanfront hot tub, an indoor sauna, and a warm soaking pool.

You’ll have everything you need right at Land’s End, but you’ll want to book your reservations as far in advance as possible as the event often draws as many as a thousand anglers to the community.