Everything You Should Know BEFORE Visiting the Homer Tide Pools

September 7, 2022 Posted Under: Travel No Comments 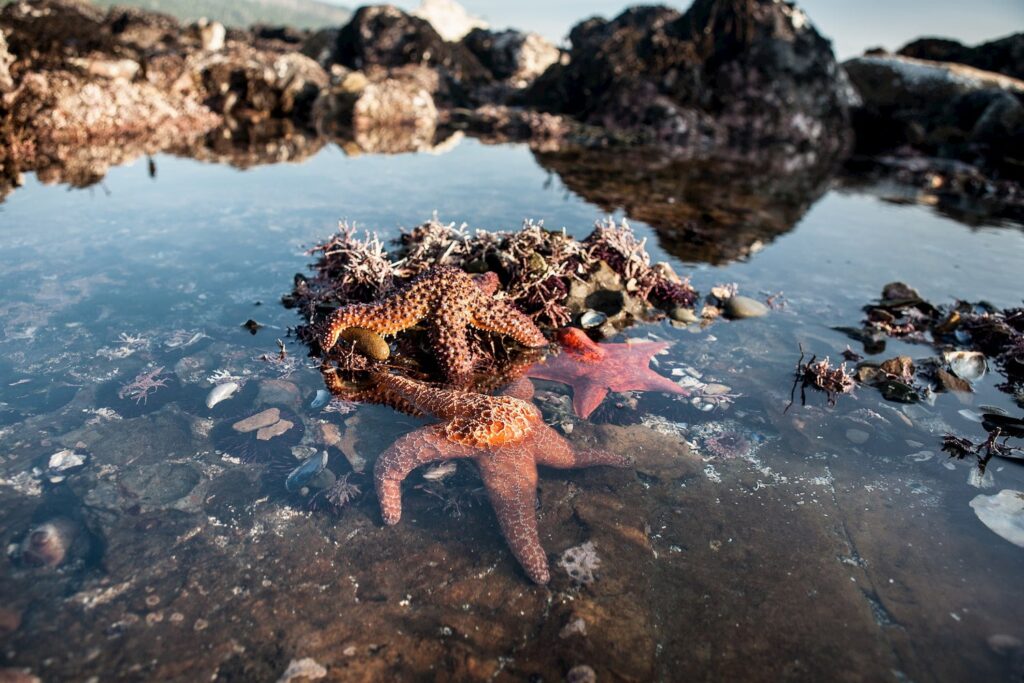 Set near the southern tip of the Kenai Peninsula, Homer may be described with various phrases like “the cosmic hamlet by the sea” or “where the land ends and the sea begins,” but one thing that stays the same when describing this fishing and arts community is its striking beauty.

Boasting one of the world’s most magnificent settings, visitors enjoy breathtaking views of Kachemak Bay with the Kenai Mountains and the volcanic peaks of Mount Redoubt, Mount Iliamna, and Mount Augustine beyond.

Homer locals and visitors alike enjoy all sorts of recreational activities, including tide-pooling, fishing, kayaking, whale watching, birding, hiking, and more during the warmer months of the year, all while surrounded by the spectacular scenery.

Homer tide-pooling is a favorite activity that just about anyone can do without having to spend anything except maybe the cost of a pair of rubber boots. When the water recedes at low tide, it’s prime time for discovering a remarkable array of invertebrates like sea stars, urchins, anemones, psychedelic nudibranchs, mussels, decorator crabs such as spider, harlequin, and moss crabs, and with any luck, perhaps the elusive octopus.

The big tides, miles of rocky beaches, and water teeming with marine life, all make Homer a great place to go tide-pooling, but there are a few things you should know before you head down to the shore in order to make the most of the opportunity here.

Homer tide pools are enjoyed at low tide–the lower the tide the more you’ll see which means you’ll want to consult a tide table to determine when the best time is to go. You can pick up a book at any sporting goods store, or go online, consulting sites like tides.net. Check for “minus tides,” which refers to the low tide dropping lower than average, with a -2 indicating that it falls two feet below the norm.

Experienced tide-poolers get excited when it gets down to -5, an extreme low tide that uncovers the subtidal zone which means you’ll start to encounter creatures that need to be in the water most of the time and aren’t seen at a standard low tide.

While sea stars in their brilliant colors are considered the “celebrities” of low tide, those big minus tides reveal chitons, strange marine mollusks that look like boats turned upside down, clinging to the rocks. The green and red blobs called Christmas anemones are also revealed at an extreme low tide, and you might even be able to spot opalescent nudibranchs which are translucent white with waving orange fringes.

With tide-pooling, there’s very little that you’ll need to be prepared. Even on an unusually warm day, don’t be tempted to go barefoot due to the slippery seaweed and sharp little sea creatures. You’ll need sturdy shoes that can get wet, rubber boots that have good traction are your best bet.

On most days it’s best to think about layers when it comes to what to wear. Even in the summer, rain is possible at any time, so a light rain jacket topped over a fleece sweatshirt and a light long-sleeve shirt is ideal. With waterproof/rain pants and a hat, you’re good to go.

You’ll want something to carry your trash in, and perhaps pick up some that others have left behind as litter can hurt or even kill marine life if they accidentally swallow or become entangled in it.

While it isn’t a necessity, bringing a pocket-sized marine life field guide, available at local bookstores and souvenir shops, which can help you to identify the critters that you discover and learn more about them. It’s a lot of fun for kids to match up plants and animals to the photos.

While the “how” part of the equation is easy, you’ll simply search the pools, there are important rules of etiquette that should be followed when tide-pooling. The key is to interact with nature while handling those little critters carefully and with the least amount of impact.

Before heading out you’ll need to know the best spots for Homer tide-pools which include the following.

If you want to be immersed in it all while enjoying easy access to the best beaches and other places for tide-pooling along with the most amazing place to lay your head down at night, there’s no better place than Land’s End Resort.

The only hotel right on the Homer Spit, you can choose from log cabins on Beluga Lake, beachfront rooms on Kachemak Bay, or luxury beachfront homes with multiple bedrooms. After your day of tide-pooling, you’ll be able to relax with a view while watching the myriad of wildlife go by.

If you need any other tips for tide-pooling or just about anything else while you’re here, you’ll have some of the friendliest and most knowledgeable resort staff in Homer to turn to. Plus, one of the very best restaurants in Homer, The Chart Room, is right on-site.

Go On An Adventure